One of the key technologies to maintain air quality is catalytic gas treatment. The need for new domestic developments in this area has become particularly acute in the context of the policy of import substitution. In addition, today new catalytic systems of Russian production turned up on the market, some of them are beyond compare.

The Russian government regularly tightens environmental requirements for air emissions. In particular, by order of Rosstandart (Federal Agency on Technical Regulating and Metrology) dated December 15, 2016 No. 1880, a new (second) BAT reference book in the field of purification of harmful emissions into the atmosphere was approved.

However, a decrease in total emissions in Russia in 2013–2016 (according to the official data of Rosstat (Federal State Statistics Service) and Rosprirodnadzor (Federal Service for Supervision of Natural Resource Usage), unfortunately, was caused more by a halt in production due to the crisis and sanctions than by the use of new cleaning technologies. Often this happens as a result of the fact that the vast majority of gas purification technologies, including those with respect to volatile organic compounds (VOCs), are of foreign origin.

Currently, various technologies for the disposal of both concentrated gas emissions and low-pollution VOC emissions are presented on the market. The choice of process solution depends on the volume and concentration of pollution. Often, the economic costs and rational use of the secondary resources of environmental protection equipment are not taken into account. The main types of technologies used in air purification are shown in Fig. 1.

The adsorption method is based on the adsorption of VOCs by solid sorbents, usually synthetic zeolites or activated carbons. For the continuous process, regeneration of the adsorbent is necessary, which requires energy consumption.
Adsorption purification can be used as an intermediate stage for destructive methods in the case of a low concentration of VOCs in gas emissions.

Biofiltration in the purification of gas emissions due to the equipment petulance and predominantly cold climate has not found wide application in our country. Biochemical gas purification is carried out in biofilters or in bioscrubbers, providing a certain temperature-moist mode and a nutrient medium for the survival of microorganisms, even small deviations from which lead to their death. In addition, for every practical application of biofiltration, pilot tests are required.

The plasma-chemical method for the oxidation of hydrocarbons is based on passing an air mixture with harmful impurities through a high-voltage discharge. As a rule, ozonizers based on barrier, corona or creeping discharges, or pulsed high-frequency discharges on electronic air cleaners are used. Disadvantages of this method: incomplete decomposition of harmful substances to the water and carbon dioxide, especially at high concentrations of VOC and low unit rating of plasma jets, making it virtually impossible to use them at high flow rates of gas emissions.

However, this method has its own market niche, limited to low costs and low concentrations. Equipment for plasma-chemical cleaning is also produced in Russia (OOO Vozduhoochistka (Air Cleaning) in St. Petersburg, the Yatagan plant, Moscow Region, etc.).

Photocatalytic oxidation of organic compounds is widely studied in the world as a promising way to carry out chemical (catalytic) reactions at room temperature. TiO2-based catalysts are used, which, when irradiated with ultraviolet light, are capable of generating reactive particles that destroy VOCs. However, the scope is even greater than that of the plasma-chemical method, limited by low concentrations and low costs.

In Russia, such equipment is manufactured only by LLC Aerolife in Moscow.

Direct combustion is usually used when the VOC content is above 12.5 g/m3. It is conducted directly in an open flame in free air at a temperature of 700-1200 °C, depending on the type of VOC. However, as the concentration of VOCs in the stream decreases, the efficiency of the method also decreases.

In catalytic oxidation, a layer of active material (catalyst) is used to accelerate the reaction, which provides the oxidation reaction to be carried out at a temperature of 200-600 °C. In this case, a degree of purification of 95-99% is achieved. The obstacle of the catalytic method is the cost, mechanical characteristics and vulnerability of the catalyst itself to catalytic poisons.

As a solution to this challenge within the framework of the import substitution program Safe Technologies together with the Boreskov Institute of Catalysis with the financial support of the Ministry of Education and Science of Russia developed a comprehensive project ‘High-performance catalytic plants for environmental protection’ (Fig. 2). A catalytic oxidation technology based on a SC type catalytic unit has been proposed, which is characterized by:

Highly dispersed active centers are, as it were, “hidden” in the glass and inaccessible to catalytic poisons (S, Si, heavy metals, etc.) entering together with the gas stream. Therefore, they favorably differ from traditional catalysts on aluminum oxides, where the active surface of metal particles openly contacts with poisons, forming inactive metal sulfides. In addition, due to the strong stabilization of platinum clusters in the glass, they do not sinter into the metal phase and do not form inactive phases. 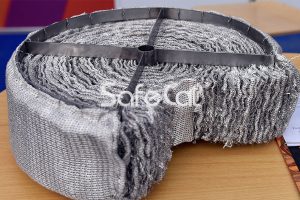 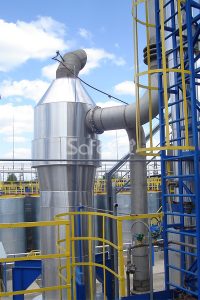 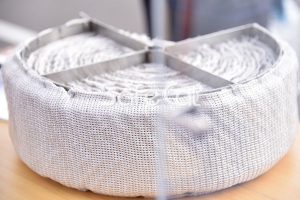 A rotor wheel with cartridges filled with an adsorbent rotates in a continuous flow of cold contaminated air at a speed of 2 to 8 rotations an hour. As the rotor rotates, the adsorbent containing the trapped substances enters the sealed section, continuously blown with hot air, where it is regenerated. Hot air with a high concentration of desorbed pollutants is directed to the afterburner. The use of a concentrator provides to reduce the flow through the catalytic afterburner and smooth out the fluctuations in the pollutant concentrations in the emissions.

Safe Technologies method, which uses zeolites instead of coal, is effective for large volumes of emissions with a low VOC content and some other pollutants in concentrations of less than 2 mg/m3. The scope of the equipment is wide: vent gas of oil tanks, treatment facilities of the oil refining industry, bitumen production. In the food industry, the concentrator-catalytic afterburner complex will cope with the emissions of bakeries, chocolate and confectionery products. The equipment will find application in mechanical engineering, the manufacture of coatings, in the leather industry, in the synthesis of rubbers and in the production of materials for synthetic coatings, etc.

There are currently no other manufacturers of equipment for this technology in Russia. In a situation where some large Russian enterprises are mothballed due to the lack of expensive imported consumables for cleaning equipment, this circumstance is important.

Read the article in pdf

The article “Innovative gas cleaning equipment – the basis of import substitution” was published in “Journal of Industrial Ecology” № 9, September, 2017.
When using the material / any part of it (media content) reference to authorship and site (https://safecat.com) is required.